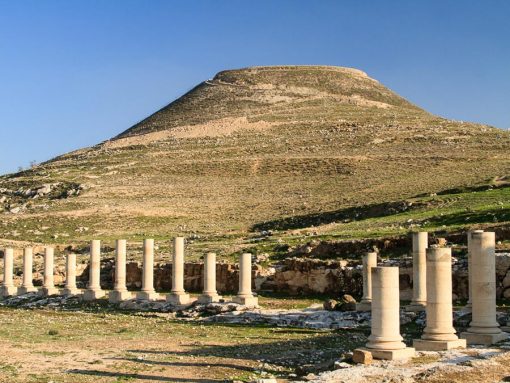 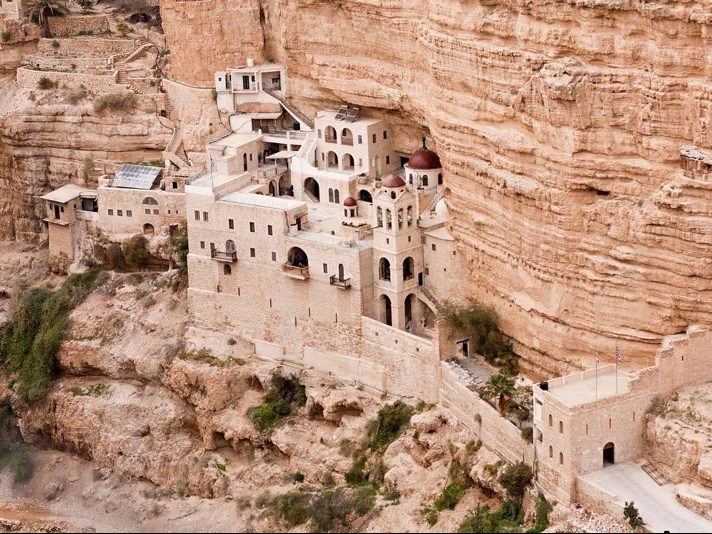 banksy the walled off hotel Bethlehem

We meet at Bethlehem 300 Checkpoint if you are coming from Jerusalem: Checkpoint 300 is about 30 minutes from Damascus Gate by bus.

Women should dress modestly and bring a scarf to ensure admission to St. George’s Monastery.

Relax in air-conditioned comfort as you drive for around 45 minutes to St. George’s Monastery in Wadi Qelt. Along the way, you’ll pass by various religious sites: St. Theodosius’ Monastery, where some believe the wise men hid from Herod the Great after they visited the baby Jesus in Bethlehem, and al-Eizariya, which many believe to be Lazarus’ Bethany village.

Stroll a short way down Qelt Valley to reach the monastery, which dates back to the fourth century, when monks first settled in the desert. They believed the site was where the Prophet Elijah was fed by ravens.

Continue driving to visit Jericho, the lowest and the oldest city on earth, your first stop will be taking the cable car up to Mount of Temptation, to the Monastery of the Temptation (Closed on Fridays), where Jesus was tempted by the devil (Matthew 4:8). The cave inside the monastery is where Jesus has fasted and meditated for forty days and nights (Matthew 4:2). From the cable car, you will be able to see the ancient Jericho archaeological site.

Visit the largest monastery in the Jerusalem Wilderness, Mar Saba Monastery dates back to the fifth century AD and perches amid the southern cliffs of the Kidron Creek. Founded by Saint Sabas (Mar Saba in Arabic), it’s been extensively expanded and fortified over the years. Please note: women are not allowed to enter the monastery. Everyone will enjoy a panoramic view of the site, but only men will be allowed to go inside and tour the monastery.

Visit the Old City of Bethlehem. Walk the narrow streets of the old city and enjoy the old architects of the buildings from the Ottoman period. Stop by Bethlehem Icon Center, which used to be a local house and today it’s a center teaching Byzantine Iconography. Walk the Star Street— the way that Joseph and Mary took when they came to Bethlehem, the birthplace of Jesus. Walk onward through the old city and stop at the main old entrance of the city then to Hosh Al Syrian Quarter, see the building from inside and stop for a cup of tea or Arabic coffee. Visit an old Olive Press museum and learn about olive harvest and olive oil production, the building which houses the museum dates back as far as the 19th century. It houses many ethnographic and archaeological artifacts featuring the entire process of oil production. Furthermore, the exhibit also shows the many uses for oil such as lamps, medicine, food, soap, and even cosmetics.

You will have a nice lunch break at Afteem Restaurant for Falafel, Hummus, and typical Salad lunch. (own expense). After you purchase your lunch, continue to Manger Square and visit the Nativity Church, the birthplace of Jesus and the oldest church in the world.

Drive to the Shepherd’s Field where the angel Gabriel appeared to the shepherds, and see the ruins that go back to the Byzantine time and the current church. Take a short drive to Herodion National Park, the palace of Herod the Great from the roman period 1st century BC. From the top of the mountain, enjoy a panorama view of the landscape of the area and from there you can see the Jordan mountains and the Dead Sea.

Finally, visit Banksy Graffiti arts in Bethlehem, The Walled Off Hotel of Banksy, and the separation wall.