My Saint George Chozeva Monastery Tour highlights the uniqueness of the Judean Desert monastic traditions located in one of the most stunning landscape of the West Bank.

Brief History of the Monastery

On one unknown day in the late 6th century AD/CE, a Greek monk by name of George from the island of Cyprus journeyed down the valley of Wadi Qelt to join the monastic community that had been founded along the cliff of this austere wilderness between Jericho and Jerusalem in the Jordan Valley of the Holy Land.  The seasonal brook that runs through the valley has been identified with the biblical city of Chezib, which is today known as Chozeba, (also spelled as Chozeba, Khoseva, Khozeba, and other similar variations). The monastery at the time was (and still is) dedicated to the Virgin Mary, but it in time it would be better known as the monastery of Saint George the Chozevite.

The monastery was already comparatively ancient by the time St. George the Chosevite arrived in the late 6th century as it had been founded in the year 420.  The first monasteries of the Judean Desert, Saint Chariton, was located just a short walking distance to the southwest along the ravine.

The Biblical Story and Cave of Elijah

The monastery that Saint George had dedicated himself to was of greater spiritual significance due to its connection of the story of the Prophet Elijah dwelling at the location in a cave as described in Kings 1:17: So he went and did according unto the word of the Lord: for he went and dwelt by the brook Cherith, that is before Jordan. Another tradition holds that two other Biblical figures, Joachim and Anna came to the cave to pray for God to bless their marriage with a child in their old age, a prayer that was answered through the conceiving and birth of the Virgin Mary.

So great was the dedicated of George the Chozevite to the monastery that he remained at the sacred space even while it was attacked during the Persian invasions of the early 7th century, in which almost all of the churches, monasteries, and shrines of the Holy Land were destroyed along with countless Christian monks and laity being killed.  The monastery endured well beyond the end of the Byzantine Era. Byzantine mosaics within the monastery attest to its ancient history. While abandoned for many centuries, the monastery was re-established in the late 19th century and continues until today under the guidance of its present igumen or hegumen, (an abbot) Archimandrite Constantinos and a modest but dedicated number of monks. 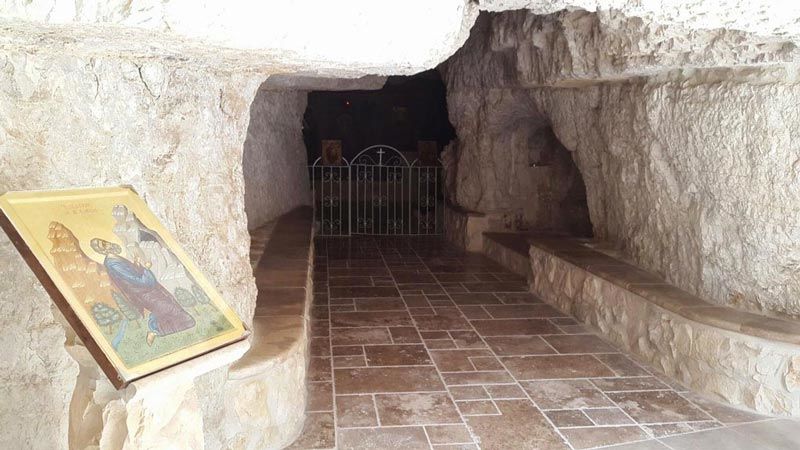 The stories of two other saints of the Orthodox Church are strongly connected to this location; John of Thebes (who also became known as Saint John the Chosevite), an important igumen of the monastery in the late 5th and early 6th century, and John the Romanian; the latter of which is the most recently canonized saint of the Greek Orthodox Patriarchate of Jerusalem and a beloved figure of the Orthodox Church of Romania, and is one of the many reasons that innumerable pilgrims from Romania visit each year to venerate the relics of their fellow countryman.  Indeed, the monastery is visited by the pious and the respectfully curious alike from different nations across the world and innumerable belief systems. 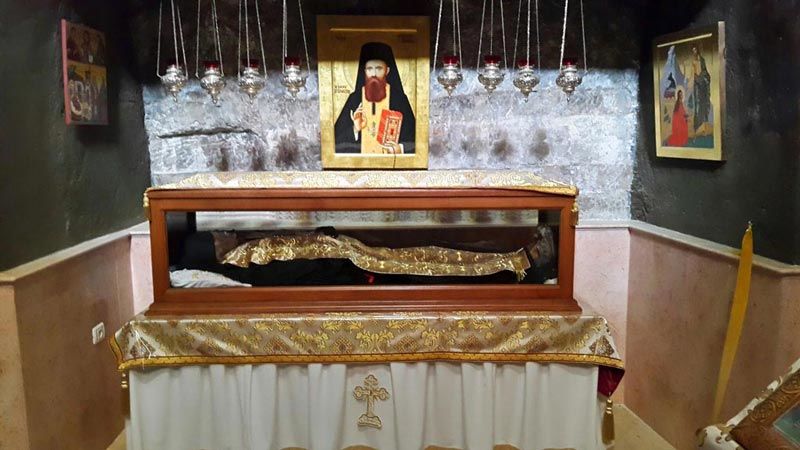 The Visit to the Monastery

These visitors come by foot down the valley and up through the gate into a world still governed by the timeless world of Orthodox monasticism, where they can view the splendid cliffs of the wadi, visit the cave of the Prophet Elijah and hopefully visit the primary chapel of the monastery where the relics of their beloved saints are kept for veneration, and meet the monks who keep this ancient way of life.  While the hot desert climate and rocky terrain may prove a challenge to some, many choose to continue on to walk through the valley – also known as the Valley of the Shadow of Death as found in Psalm 23 – after their visit.  Whether visitors return back up the hill or continue on through the valley, they are profoundly moved by their experience to Saint George Chozeva monastery, an island of an ancient Christian way of life.

Michael Tours offers a guided private Saint George Chozeva Monastery Tour that includes Jericho, Wadi Qelt/the Valley of the Shadow of Death, the River Jordan, and the surrounding area; to book this tour or other Holy Land destinations, contact us.