Tour to Mar Saba Monastery: A Monastic Treasure in the Judean Desert

A few miles to the east of Nativity Church in Bethlehem lies a treasure of great importance to the Holy Land; a living embodiment of the great monastic Christian tradition that once made the Judean Desert a colony of aesthetic Christian life from the city of Jericho to the ruins of Masada fortress.   Only a few miles in actual measured distance from Bethlehem, Jerusalem and Jericho, through the breathtaking jagged wadi (a natural watercourse) and desert hills of the Jordan Valley, one of the largest and most historic Christian monasteries in the world lies perched against the western cliffs of the Kidron Valley:  the Monastery of Saint Savvas the Sanctified, known locally by its Arabic name, Mar Saba.

Learn About Mar Saba Monastery in a Private Tour

Mar Saba monastery was built as an enclosed monastery with high stone walls and two towers, only men are allowed to enter the sanctuary, however, with our private Mar Saba tour, women can enjoy the breath-taking view of the Jordan Valley and view the interior of the monastery from the base of the southern tower, which lies outside the walls.

Inside, members of the Brotherhood of Saint Savvas the Sanctified, as the monastic community is known, are busy throughout the day in prayer, fast, labor at their assigned chores of cooking, cleaning and offering hospitality to pilgrims and visitors.

Following a short rest at dusk, they arise at midnight for hours of prayer and services conducted in the Greek language, with only the glow of candles and lit colored lamps to break the darkness.

Inside The Mar Saba Monastery

Within the monastery walls, over a half-dozen churches and chapels exist alongside the Catholicon (primary church) of the Annunciation, where the relics of Saint Savvas the Sanctified himself are placed within a special ornate reliquary for the veneration of the countless pilgrims who enter the monastery.

Across from the Catholicon lies the cave-church of Saint Nicholas; one of the oldest continuously functioning churches in the Holy Land and also an ossuary of the bones of the martyrs of two great massacres of monks in the 7th century.

Travel Back To The late 5th Century AD

The founding of the monastery extends back to the late 5th century AD, when Saint Savvas, a Greek monk from the region of Cappadocia in modern-day Turkey, left his monastery in the Jordan Valley with the blessing of his Abbot, Euthymius the Great (also a saint), and ventured south, seeking a place suitable for contemplation and prayer.

When a pillar of light shown down on a rocky hillside in the Kidron Valley, Saint Savvas began to construct his monastery, which grew in such size and reputation for its quality of monastic life that it became known as the laura/lavra (a sort of “hive” – in reference to the monastery being a concentrated center of a larger number of monks) of Saint Savvas.

In the years following his death in the early 6th century, Saint Savvas, now called the Sanctified, would become known as one of the great saints of not only the Holy Land, but of Christianity in its entirety.

At its peak, the Brotherhood numbered several hundred monks.

Today, the Brotherhood of Mar Saba include approximately a dozen members and a number of novices contemplating a life of monasticism in one of its most austere form as decreed by Saint Savvas in his rule of prayer, known as the Savvite Typikon, which is considered the Orthodox equivalent of the rule of Saint Benedict in Catholic monasticism.

So strict is the rule of the Brotherhood that even apples are forbidden, in memory of the temptation that Eve fell to in the Garden of Eden. Yet the monks who do choose to dedicate their lives in service to the monastery are part of one of the world’s most ancient and revered communities of its kind; inheritors to the dream of preparation for the next world through a life of sacrifice in prayer in the beautiful Kidron Valley.

Michael Jackaman offers regular tours to Mar Saba Monastery, as well as the adjacent monasteries of Mar Theodosius near Beit Sahour, and other monasteries in and around Bethlehem, Jericho and Nablus. Contact us to book your tour! 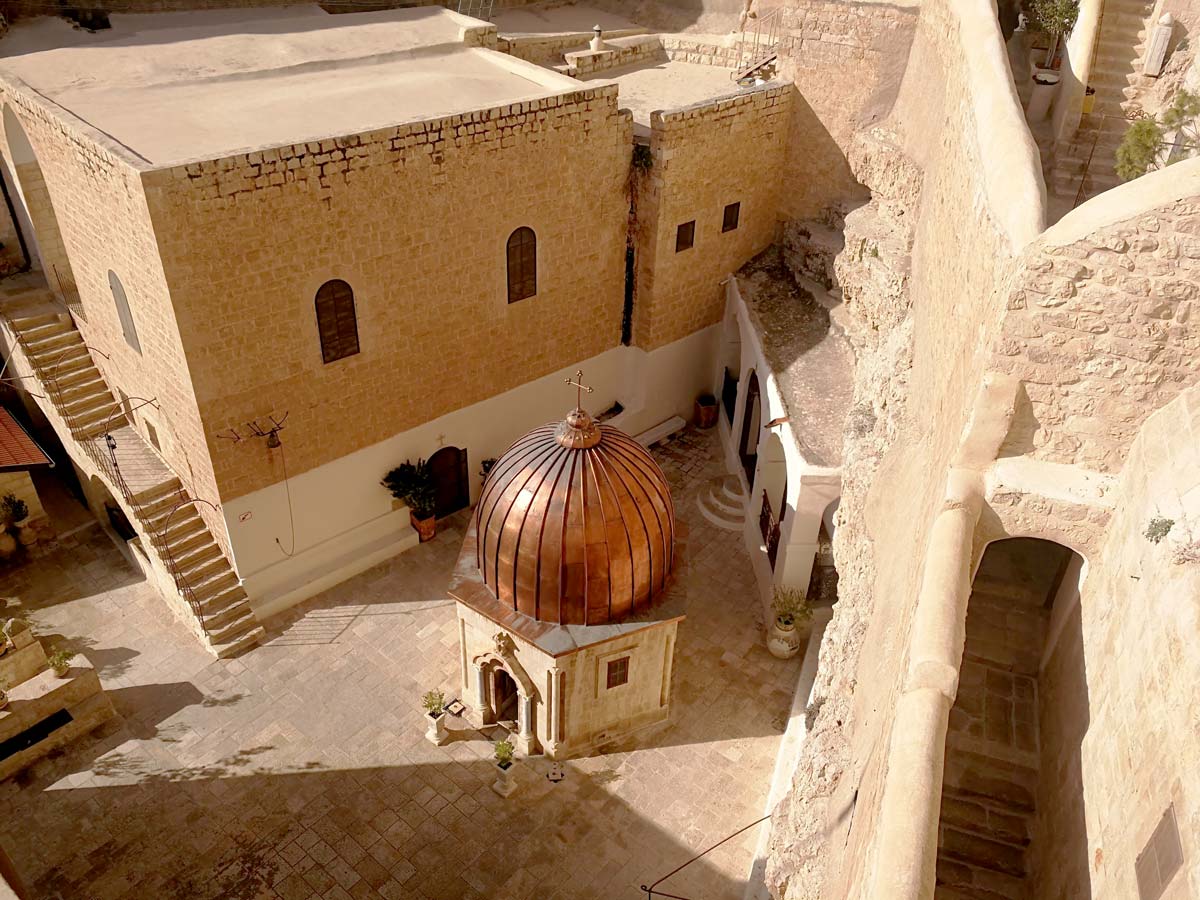 View from inside Mar Saba Monastery

Go on a Private Tour to Mar Saba Monastery!

Benefit from a private tour booked only for you where you can learn more and focus on the details to enrich your knowledge of the history, culture and the monastic life in Mar Saba Monastery. Ask questions freely, your guide will help you to understand and connect stories together.

Tours of discovery through ancient cultures, history, and religions in an exceptional country