Jerusalem: Holy Week, the Holy Sepulchre and the Holy Fire

My Jerusalem tours cover all of the religious, historical and archaeological heritage of the city, but I have a special interest in showing its Christian heritage.  This blog will focus on the Holy Sepulchre during the most important ceremony of Holy Week leading to Pascha (Easter) in the Orthodox Church: the service of the Holy Fire.

This coming weekend, in the heart of the Christian Quarter of the Old City of Jerusalem, the Holy Sepulchre will not be open to Orthodox pilgrims for Holy Week celebrations for the first time in centuries, due to the COVID 19 pandemic.  Conventional wisdom holds that the last time Holy Week celebrations were this severely disrupted was during the time of another pandemic during the middle of the 14th century, nearly 700 years ago.   This past week, the Franciscan Custody of the Holy Land conducted their Holy Week and Easter services in the Holy Sepulchre as per the Gregorian (Western) calendar.  This weekend, we will witness a similar situation as the Orthodox Church celebrates their own Easter, known as Pascha.

While it has been a very, very long time since Holy Week services were so disrupted, it is not the first.  Services have not been held in perpetuity since the time of Christ, or even the dawn of the organized Christian faith. The Church of the Holy Sepulchre, and prior to that, the structures of worship built around the tomb of Christ, were not constructed immediately after the ministry of Christ, nor has there been an unbroken period of undisturbed Christian administration and services on the site.  In short: this is not the first time there has been a disruption of services at the Holy Sepulchre, nor will it most likely be the last. 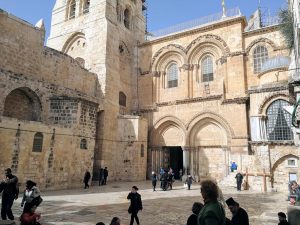 To understand the Church of the Holy Sepulchre and its functionality, it is helpful to think of it less as one of the world’s “great” architectural churches such as St. Peter’s Basilica in Rome, Notre Dame in Paris, or St. Basil’s Cathedral in Moscow.  First, it is not an exceptionally large structure, nor is it known for being a beautifully constructed one. Second, it is less a single structure with a neatly developed layout, as much as it is a jigsaw puzzle of different chapels, adjacent churches, a reliquary, administrative offices, eras and styles of construction that reflect its complex history.  Third, the Church of the Holy Sepulchre includes Golgotha, the place of Christ’s crucifixion, along with the tomb of Christ, hewn from the stone of the foundation that it stands on. In fact, what is left of the original tomb is a remnant, with has suffered severe damage through deliberate vandalism and deliberate alterations throughout the eras. The structure built over the remnants of the tomb, called the aedicule/edicule, is a relatively modern innovation that underwent extensive renovation in 2016, during which time archaeological evidence confirmed that the burial site of Christ has been identified as such since the early Christian presence.   It is within and in front of the edicule where primary worship services within the Holy Sepulchre are held at appointed times of the day, but innumerable chapels and other spaces of worship, dedicated to some of the most important moments and Biblical individuals connected to the Easter story on this site, are also managed by the various Christian communities. Along with the edicule and the chapels of Golgotha located a few yards away on an elevated ledge within the structure that can arguably be defined as essentially a Byzantine Church with substantial Crusader to 20th-century renovations, these “other spaces” collectively comprise the center of worship what we know as the Church of the Holy Sepulchre.

The human dynamic at the Holy Sepulchre

Let us briefly cover the equally fascinating story of the human dynamic at the Holy Sepulchre.

The administration of the structure as a center of worship and place of pilgrimage is shared by the Greek Orthodox Church through the Brotherhood of the Holy Sepulchre, the Roman Catholic Church through the Franciscan Custos of the Holy Land, and the Armenian Patriarchate of Jerusalem, which also represents the interests of the Coptic, Ethiopian and Syriac Christian churches, in a system known as the Status Quo.

These rules of church jurisdiction, boundary lines, and the order of services, handed down from the era of the Ottoman rulers down to the British, Jordanian and now Israeli government, are as historic and complex as the building itself, all of which is kept in balance by a centuries-old custom of none of the churches holding the key to the front door of the Holy Sepulchre. The key to the door is held by two Palestinian Muslim families from within the Old City of Jerusalem whose respective responsibility it is to open and close the Church every day of the year (during normal times.)

While the pageantry of services and rituals is normally nonstop throughout the year, the most spectacular event of all is not the Easter Sunday service, but rather the ceremony of the Holy Fire, held on the Orthodox celebration of Holy Saturday the day before Easter, in which the Greek Orthodox Patriarch is temporarily sealed within the edicule with two bundles of thirty-three unlit candles representing the thirty-three years of the life of Christ.  Following a brief period, the Patriarch emerges with both bundles lit through what is held to be the Holy Fire, a flame created by miracle through the Holy Spirit. The Holy Fire is then spread throughout the packed Holy Sepulchre and Christian Quarter of Jerusalem to all Christian communities in the Holy Land, then to countries with national Orthodox Churches or substantial Orthodox communities in the Middle East, Europe and beyond. It is a sight to be experienced like none other in the Holy Land or the world, and is the penultimate goal of any Christian whose tradition accepts the ceremony as a genuine miracle.

Sadly, this years’ ceremony of the Holy Fire will not include the full ritual of the celebration, as it will still be conducted by His Beatitude Patriarch Theophilos III and a minimum number of church hierarchs and clergy, as well as live-streamed to the world through the internet for the benefit of all.

May our beloved traditions return to normal next year, for the benefit of pilgrims and local Christians alike!  May this time also remind us of the enduring strength of the Christian faith in the Holy Land, a gift that has repeatedly witnessed and overcome the unique challenges of each era.

From Bethlehem, I wish you Happy Easter with our traditional Arab Christian greeting: Al-Masih-Qam! Hakkan Qam! – Christ is Risen!  Indeed, He is Risen!

Michael Tours coordinates Jerusalem tours of the Holy Sepulchre and all the principal sites of Christian Pilgrimage in Jerusalem, including the Via Dolorosa, Ecce Homo, Saint Anne’s Church, Mount of Olives and Gethsemane; to book this tour or other Holy Land destinations, contact us.  You can also inquire about booking Holy Week tours to witness the Holy Fire in 2021.