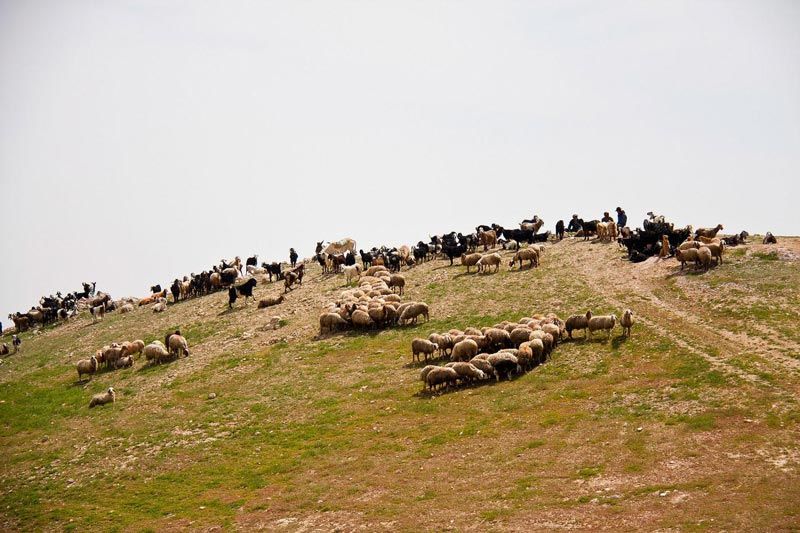 And there were shepherds living out in the fields nearby, keeping watch over their flocks at night.  An angel of the Lord appeared to them, and the glory of the Lord shone around them, and they were terrified. But the angel said to them, “Do not be afraid. I bring you good news of great joy that will be for all the people. Today in the town of David a Savior has been born to you; he is Christ the Lord.  This will be a sign to you: You will find a baby wrapped in cloths and lying in a manger….When the angels had left them and gone into heaven, the shepherds said to one another, “Let’s go to Bethlehem and see this thing that has happened, which the Lord has told us about.”

Our knowledge of the shepherds who were the first to hear of the birth of Jesus is almost completely limited to the excerpt of the above-quoted second chapter of the Gospel of Luke; in fact, there isn’t even a tradition of the precise number of shepherds or their names.   What we do know a good deal about is precisely where the fields are, and the tradition of Christian veneration of the Shepherd’s Fields, known locally by their Arabic name, Kaneset Al-Ra’awat.

Tradition holds that the Shepherd’s Fields are located to the immediate east of the historic (and contemporary) town of Bethlehem; easily within walking distance of where the manger that the Holy Family used would have been.  The site is also identified with the story of Ruth and Boaz from the Old Testament, as told in the second chapter of the Book of Ruth; on occasion, the area is also referred to the historical fields of Boaz. In no small part due to its proximity to the place of the Naitvity of Christ, the site appears to have been a center-point of pilgrimage for as long as places such as the Church of the Nativity and the Holy Sepulchre.   Today, the village of Beit Sahour is the largest majority Palestinian Christian community in the Holy Land, with its inhabitants – known as Sahouri – being well-known for their craftsmanship in the production of olive wood figurines, Nativity sets and other items that are sold throughout the Holy Land and abroad.  And while the age of Christian shepherds in the fields where Ruth harvested grain has now passed, the Sahouri remain proud of their Christian heritage and connection to the Nativity story.

At present, there are two sites dedicated to the memory of Shepherd’s Fields.

The Franciscan Custos of the Holy Land maintains an expansive pilgrimage center, at the center of which is an innovative chapel, built in the mid-20th century by the pre-eminent Holy Land architect of the Franciscans, Antonio Barluzzi. Archaeological excavations from the 1950s have also confirmed that the site included a Byzantine monastery that dates back to the 5th century AD.  A cave-chapel, one of many in the region that were historically used by the shepherds and villagers of Beit Sahour, is reminiscent of the sort of shelter that the nameless shepherds of the Nativity story may have well slept and warmed themselves in on the very first Christmas Eve before their angelic visitors arrived.

A short distance away, the Greek Orthodox monastery of the Shepherd’s Field is the lesser-known location, but it may very well be the more historical site of the two.  Ruins of a series of churches that were most likely meant to accommodate some of the earliest pilgrims dating back to the Byzantine era are on display, as is another cave-chapel dating from the 19th century. A 20th-century church built in contemporary Greek Orthodox fashion that features wall-to-wall iconographic murals is also to be found on site.   Both sites hold traditions of religious services in and around the two celebrations of Christmas; in the Gregorian calendar celebrated by the Catholic and Protestant churches in the Holy Land (December 24th/25th), and in the Julian Calendar celebrated by the Greek Orthodox Patriarchate of Jerusalem (January 6th/7th).

Whether I bring my pilgrims and tourists to one or both of these sites, I always find that their knowledge of the story of Bethlehem and its special role in the celebration of the birth of Jesus is strengthened as they look out over the plains and hills to the east of Bethlehem, and turn their gaze upwards – if only for a minute – into the sky above.

Michael Tours offers custom tours, hikes and experiential visits across the West Bank, including such destinations as Beit Sahour, Bethlehem, Nablus, Hebron and many other locations in the Holy Land. Contact us to book your tour!

Book Your Tour To The Shepherd's Field!