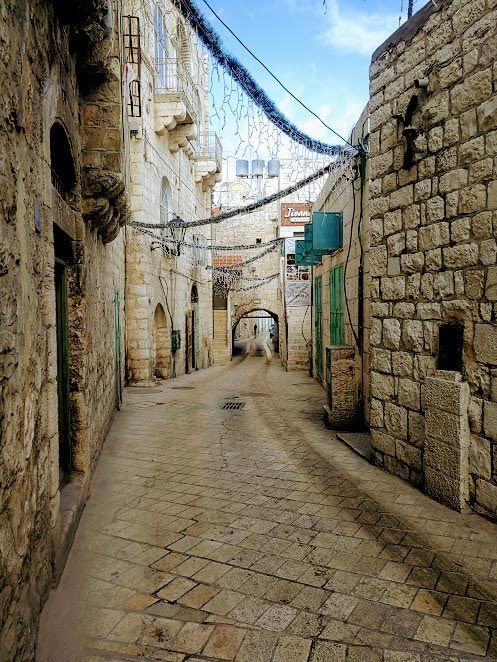 World Heritage Site: Church of the Nativity and the Pilgrimage Route, Bethlehem

The inscribed property is situated 10 km south of Jerusalem on the site identified by Christian tradition as the birthplace of Jesus since the 2nd century. A church was first completed there in ad 339 and the edifice that replaced it after a fire in the 6th century retains elaborate floor mosaics from the original building. The site also includes Latin, Greek Orthodox, Franciscan and Armenian convents and churches, as well as bell towers, terraced gardens and a pilgrimage route.

Bethlehem lies 10 kilometres south of the city of Jerusalem, in the fertile limestone hill country of the Holy Land. Since at least the 2nd century AD people have believed that the place where the Church of the Nativity, Bethlehem, now stands is where Jesus was born. One particular cave, over which the first Church was built, is traditionally believed to be the Birthplace itself. In locating the Nativity, the place both marks the beginnings of Christianity and is one of the holiest spots in Christendom. The original basilica church of 339 AD (St Helena), parts of which survive below ground, was arranged so that its octagonal eastern end surrounded, and provided a view of, the cave. This church is overlaid by the present Church of the Nativity, essentially of the mid-6th century AD (Justinian), though with later alterations. It is the oldest Christian church in daily use. Since early medieval times the Church has been increasingly incorporated into a complex of other ecclesiastical buildings, mainly monastic. As a result, today it is embedded in an extraordinary architectural ensemble, overseen by members of the Greek Orthodox Church, the Custody of the Holy Land and the Armenian Church, under the provisions of the Status Quo of the Holy Placesestablished by the Treaty of Berlin (1878).

During various periods over the past 1700 years, Bethlehem and the Church of the Nativity have been, and still are, a pilgrim destination. The eastern end of the traditional route from Jerusalem to the Church, known as the Pilgrimage route, marks the road that connects the traditional entrance of Bethlehem, near King David’s Wells with the Church of the Nativity, and extends along the Star Street through the Damascus Gate, or Qos Al-Zarara, the historical gate of the town, towards the Manger Square. The Route continues to be celebrated as the path followed by Joseph and Mary during their trip in Bethlehem during Christmas ceremonies each year, and is followed ceremonially by Patriarchs of the three churches at their several Christmases, and during their official visits to Bethlehem.

The outstanding universal value of the Church of the Nativity and the Pilgrimage Route, Bethlehem, lies, in its association with the birthplace of the founder of a great religion, which for Believers saw the Son of God made man in Bethlehem.

And for the way the fabric of the Church of the Nativity and its associations have combined to reflect the extraordinary influence of Christianity in spiritual and political terms over 1500 years.

Criterion (vi): The Church of the Nativity, and the Pilgrimage Route to it, are directly associated with the birth of Jesus, an event of outstanding universal significance, through the buildings of which were constructed in the 4thcentury AD and re-constructed in the 6th century AD. These are a strong symbol for more than 2 billion Christian believers in the world; and are Holy to Christians as well as to Muslims.

The small area of land to the east that is directly associated with the ensemble,  is known to contain as yet systematically unexamined and largely undisturbed evidence of occupation and burial from the early centuries AD back to at least the mid-2nd millennium BC.

The approach to the Church via Star Street and Paul VI Street retains the street width and line fossilized by urban development since c. 1800 AD. This ‘width and line’, as well as defining a working street in a busy town, now formalize a commemorative route for a religious ceremony. The traditional 19th and 20th yellow limestone buildings either side of this route incorporate traditional design and appearance, with living accommodation above and workshops at street level opening out on to the street. These are not part of the property but need to be protected and conserved as part of the approach to the church.

The roof structure of the main Church is highly vulnerable to lack of maintenance and repair. The sharp increase in the number of vehicles, inadequate parking, and small industries within the historic town have produced a polluted environment that is negatively affecting the façades of both the Church of the Nativity and the buildings along the Pilgrimage Route.

Great urban pressure is acknowledged in the surrounding urban areas, to which largely unregulated tourism and traffic contribute. New constructions, some large, are disturbing the traditional urban fabric near the Church of the Nativity and are having a negative impact on views to and from the property ,and on  its sense of place and  spiritual associations.

Located on the spot believed to be the Birthplace of Jesus Christ for some 2000 years, the Church of the Nativity is one of the most sacred Christian sites in the world since at least the 4th century AD up to the present. The sanctity of the site is maintained by the three churches occupying it. The construction of the church in 339 AD above the grotto, and its reconstruction in 533 AD, commemorates the birth of Jesus and attests to seventeen hundred years-long tradition of belief that this grotto was indeed the birthplace of Jesus Christ.

The association of the place that was believed to be the birthplace of Jesus is documented from the 4th century AD and from then on the buildings added to it have been constructed to enhance this religious significance. The majority of the existing church today dates beck to the 6thcentury AD, but retains part of the 4th century floor and some parts of its walls and columns, and have 12th century and later additions that are obvious in the icon painting on the columns of the church. The 12th century additions reflect the Crusades that led to one of the upsurges in pilgrimage activity.

From medieval times the church has been supported by monastic communities for which there is strong material evidence. The buildings of one of the monastic complexes date back to at least the 12th century while there is evidence under the others for earlier monastic buildings dating to the 12th century. Apart from the Armenian Convent, most of their current apparent structures date from the 19th and 20th centuries.

All elements of the church associated with the original church, its re-building in the 6th century, and its alterations in the 12th century need to be clearly identified and a conservation plan agreed to ensure repair and restoration respect as much as possible of  the existing fabric that is crucial to understanding its significance.

The Church of the Nativity and its monastic complexes and the town of Bethlehem developed in tandem over the centuries. The current lack of control of development, traffic and tourism in the immediate urban surroundings of the Church is threatening this relationship  and the ability of the property to convey fully its spiritual links. The exceptionally high number of people within the Church of the Nativity at any one time is impacting adversely on the conservation of the fabric The sharp increase in the number of vehicles, inadequate parking, and small industries within the historic town, have produced a polluted environment that is negatively affecting the façades of both the Church and the buildings along the Pilgrimage Route.

A technical plan for the restoration of the roof of the Church of the Nativity has been developed by the advisory committee that was formed by the Palestinian president in full cooperation with the three churches in charge of the church. Intervention to restore the roof of the church was indicated as a priority by the international team who worked on the plan, and the works are expected to start during the year.

A Conservation Strategy needs to be developed for the Church of the Nativity to guide the repair and restoration of the roof and future conservation interventions in order to optimise retention of the fabric relating to the 4th, 6th and 12th century interventions.  Such a Strategy should synthesize the conclusions of the detailed investigative reports into a clear statement of the significances of the various elements within a comprehensive conservation philosophy for the proposed work. Conservation Plans also need to be developed for the other ecclesiastical buildings.

The second main component, the Pilgrimage Route, principally Star Street, is part of the Municipality of Bethlehem and is therefore covered by the provisions of ‘Building and Planning Law 30, 1996’, of ‘the ‘Bethlehem Charter 2008’, of the ‘Guidelines for the Conservation and Rehabilitation of the Historic Towns of Bethlehem, Beit Jala and Beit Sahour, 2010, and of the ‘General Rules for the Protection of the Historic Area and Historic Individual Buildings, Bethlehem, 2006’. Protection’, ‘Conservation’, and ‘Rehabilitation’ are the stated objectives of the last two enactments, and the ‘Charter’, which embodies a statement of principles as well as working practices to achieve those objectives. Nevertheless stronger controls are needed to ensure that the urban context of the property is not eroded. This area is now an Area under Planning, and any interventions are forbidden until the adoption the conservation and management plan and the bylaws that are currently being prepared by CCHP in cooperation with Bethlehem Municipality and MoTA.

A Management Plan will be developed for the overall property by the Committee set up to oversee the roof repairs and this should define an overall management system for the property. This Plan needs to address the urban pressure on the property, tourism and traffic management, protection of views, and the conservation of buildings along the pilgrimage route. The Plan also needs to address the better management of visitors, as the provision of facilities for visitors are impacting adversely on the fabric of the surrounding town.